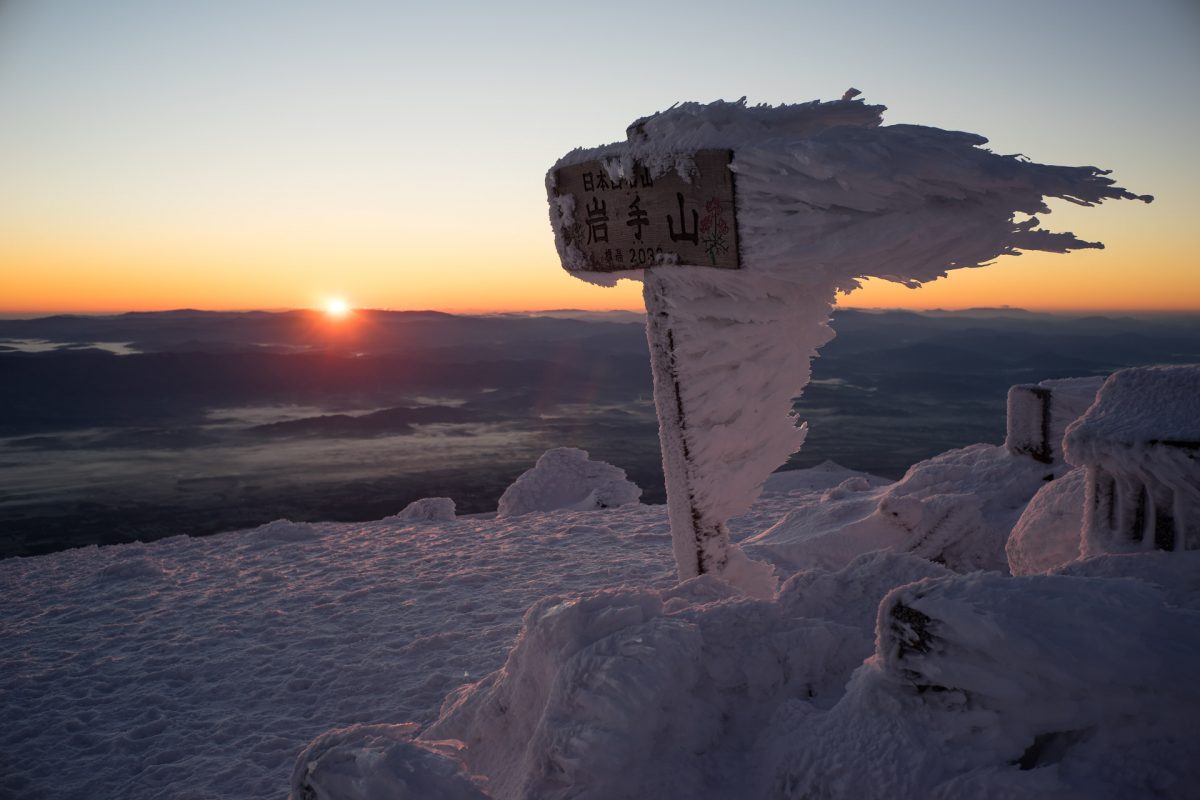 On the way, I took quite a few pictures. Because I couldn’t see the mountain with my own eyes at all, framing the shots was really difficult. Basically I took one shot and then moved the tripod slightly to take a perhaps better framed one.

There was a huge empty parking lot at the Yakehashiri trail head (焼け走り登山口) complete with a toilet/washroom and of course hot-drink vending machines.

One last picture of the mountain and I set off at approx. 0:50am. The trail went through a fairly thick forest and the slope increased steadily. It’s approx. 7km and 1450m of elevation gain till the summit.

The trail has two designated “view points”, the second of which (1105m) I reached about 1h after I started the climb.

The view was amazing with stars all around. Also I could now see the mountain better with its snowline. Soon after the view point, the trail started to get increasingly snowy.

It still weaved through a sort-of forest but quite a bit of snow had already accumulated, making me regret not bringin gaiters (picture at 1485m). The view was amazing though, with the clear air the city beneath kind of became a mirror of the starry nightsky.

At 1756m the trail evened out a bit, revealing a beautiful view of the rest of the mountain. In the meantime, the moon had also risen illuminating the snowy landscape with a christmas-y feel.

There was also an empty refuge hut and could be used to sleep in. I took a little rest in there and started to realise how cold it actually was, -10°C within the hut! It didn’t feel that cold at all while climbing…

Many pictures later I left for the summit at 4:45am, the sun was to rise at 6am, leaving me with quite a bit of time to spare.

When I arrived at the summit ridge, the sky on the eastern side was lit up in bright orange.

I melted some snow while taking pictures and waiting for the sun to come up. The time right before sunrise is usually the most beautiful!

The summit was fairly broad, so it’s easy to walk around. I imagine this place gets extremely crowded during the summer…

As predicted, exactly at 6am the sun rose over the horizon!

And tinted everything in a beautiful golden light. On the opposite side, you could see the shadow of the mountain all the way to the bottom. That’s one beautiful thing about volcano mountains due to their uniform cone shape. This is the view back towards Yakehashiri (焼け走り), you can see the little refuge hut on the lower left of the image.

After tea I boiled some more water for cup noodles. Actually, I was very surprised that I was in fact the only person up on the summit at sunrise. There are many trails to Mt Iwate and I chose one of the less popular ones, expecting that at least a couple people would climb the mountain from a different trail head that day.

After eating I started to hike around the caldera. The wind seemed to be consistently very directional…

Just south of the crater where all but the Uwabo/Yakehashiri trails meet to go up to the caldera, a spacey, modern refuge is available. I still wasn’t sure yet where I’d descend to in the end, but was kind of aiming for Amihari Onsen (網張温泉), as there would be a hot bath awaiting…

The trail basically followed a ridge for a long time with many ups and downs and amazing views. On the top right of the image Mt Hachiman can be seen.

Being a volcano, the rock has a great contrast with the snow and heats up quickly under the sun.

As the altitude decreased I was surrounded by small trees again. No one (except for animals) had walked on this trail yet since the snow fell…

Surely enough, I also spotted the footsteps of a bear on the trail, who seemed to have followed the trail for quite some time!

Right before the junction where the trail towards Amihari Onsen (網張温泉) descends, I met a Japanese couple. We got talking and they said they arrived at Matsukawa Onsen (松川温泉) the night before and wanted to go to the summit of Mt Iwate but won’t make it anymore (too late). After I told them where I came from, they asked my if I saw a van passing my the night before, and surely enough they had seen me walking on the road towards the trail head. They said they were pretty perplexed seeing a person walking there and wondered if “he” was alright…

As previously said, this mountain is a volcano so it also still has hot surface areas. On the previous picture there is no snow in the foreground because the soil is actually warm to the touch. That went on for some time…

After meeting another two hikers and talking to them I decided to continue on to Matsukawa Onsen (松川温泉) as the Onsen was supposed to be a lot better and it wasonly slightly further away. I could see the destination afar! Only 6km or so to go…

After 25.29km and 2000m cumulative elevation gain I finally reached Matsukawa Onsen (松川温泉) at 12:15pm. Interestingly, a geothermal powerplant was built there recently. They are still rare in Japan, apparently because many geothermal regions are within National Parks so no powerplants are allowed to be built there.

If you are ever in Matsukawa Onsen (松川温泉), definitely check out Kyounso (峡雲荘) – great Onsen all around for a fair price! The bus stop towards/from Morioka (盛岡駅) leaves right infront of the Onsen.

I’d be happy to answer any questions about this trip/Mt Iwate/hiking in Japan and also happy to share the GPS GPX track of the tour!

On the way back I grabbed this shot when my bus passed the FamilyMart from where I had left the day before. Mt Iwate certainly looks big during the day!

Before taking the bus back to Sendai, Iate Jajamen (じゃじゃ麺) at Hakuryu (白龍) in Morioka station. It’s a specialty from Iwate-ken which you eat in two stages. Basically, it’s noodles with lots of Miso paste (the dark stuff on the top) and cucumbers. You eat almost all noodles, and then you get a soup in which you put the rest of the noodles. Highly recommended!!