This post is part two of two about hiking the Yakushima traverse in Japan, for part one go here.

After waking up to a little bit of sun peeking through the trees, we had breakfast and started to pack up. The tent was wet from the inside due to condensation and there was no way it was going to dry out in the humid climate, especially with the forest blocking out the direct sunlight. At least it wasn’t raining. At around 7:45am the first day hikers arrived at the Ohokabu (大株歩道入口) coming up from the Arakawa Trial Head (荒川登山口) and said hello while we had a coffee. The day was going to be long so we finished everything up quickly and left at 8:15.

After 30mins we arrived at the famous Wilson Stump (ウィルソン株), which is Cedar tree stump so large that you can go inside! 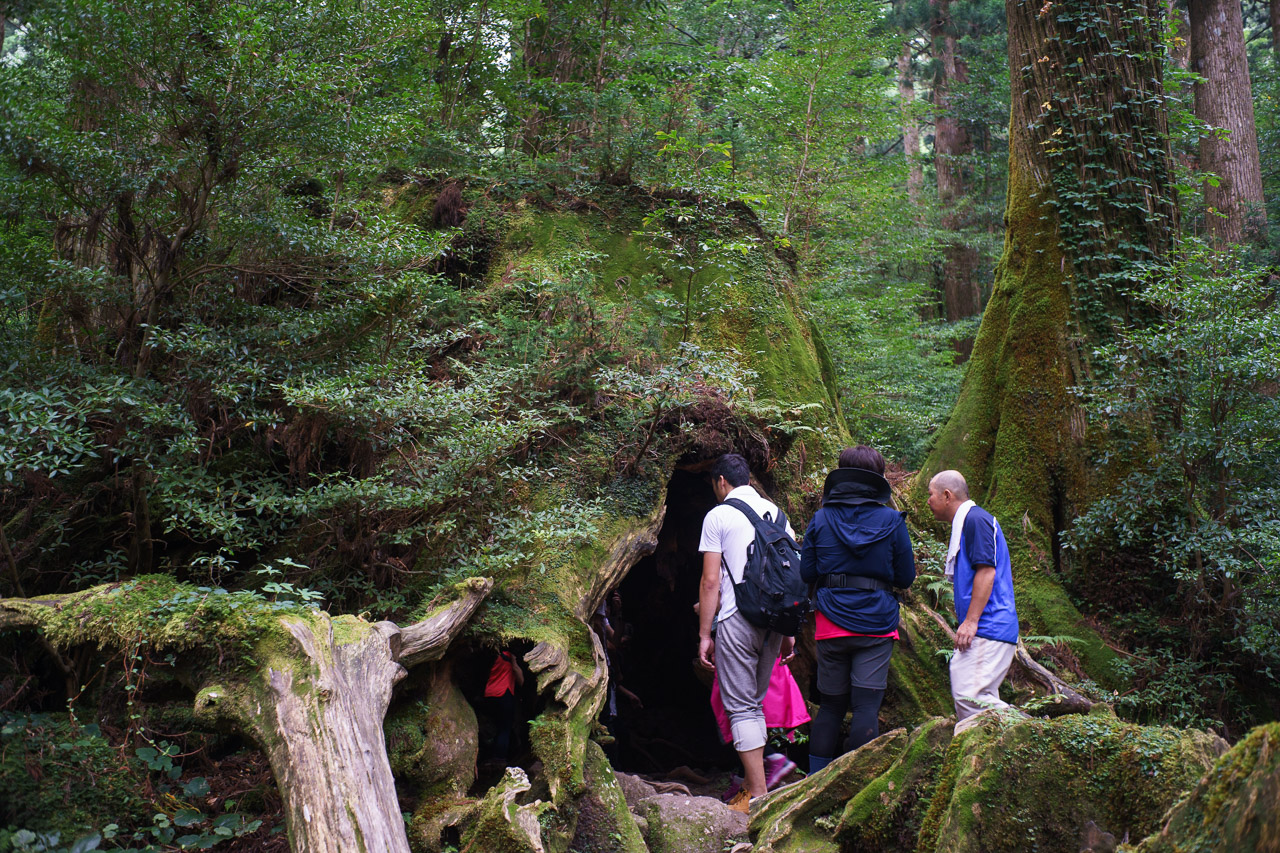 Special about the Wilson Stump is the shape of the cavity in the stump, it is shaped like a rather perfect heart and thus very popular in Japan! Apparently, most Japanese people have seen the stump’s shape at some point on TV. 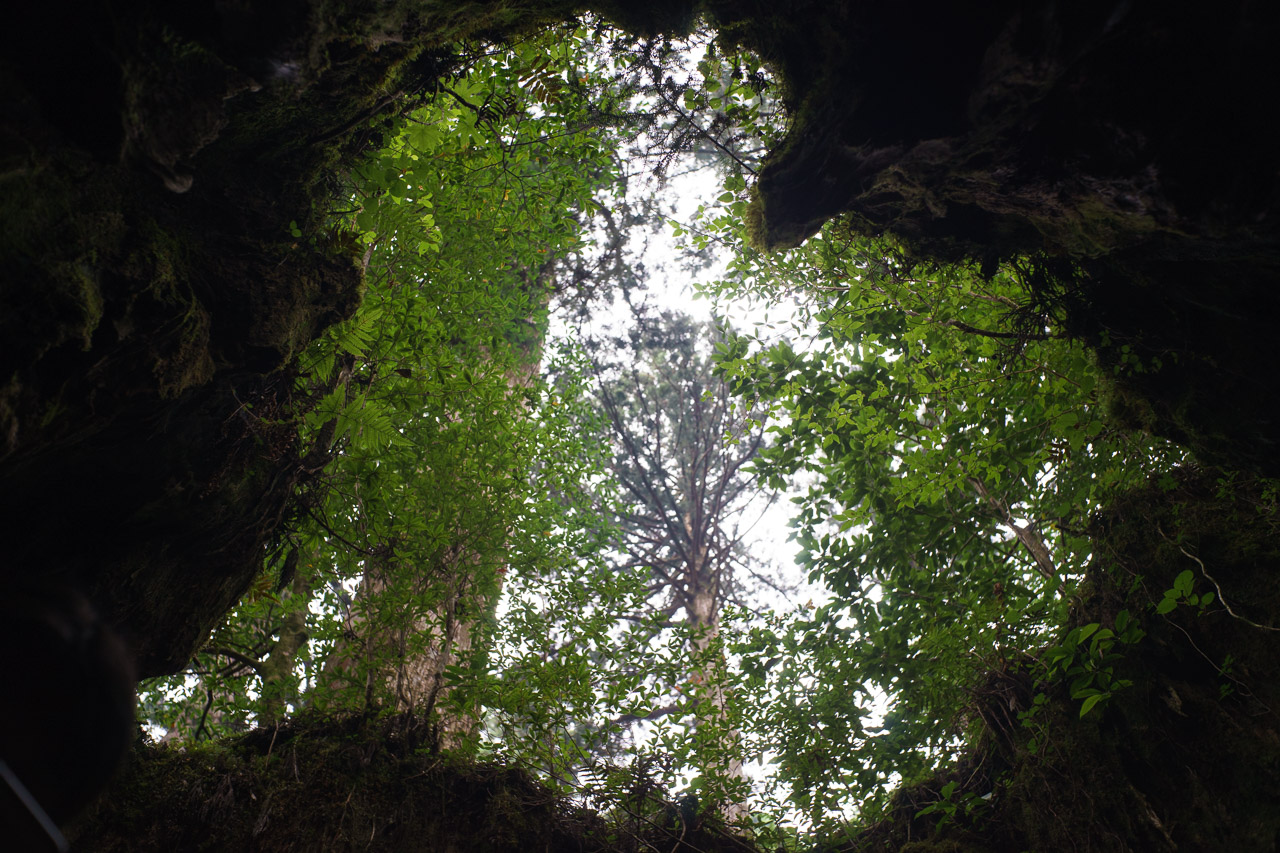 As you can imagine, it’s a pretty popular place to take pictures, particularly of couples so there are sometimes queues forming up… To get a good shot a somewhat wide lens is required, the one above was made with a 35mm lens but I had to basically lie on the floor in a really uncomforable position :p.

The path continues up through the forest, often on elevated wooden planks to protect the ground. This time, there were also small windows through which we could get a glimpse of the “outside”, which were in turn blocked by low hanging clouds, like so often on Yakushima. 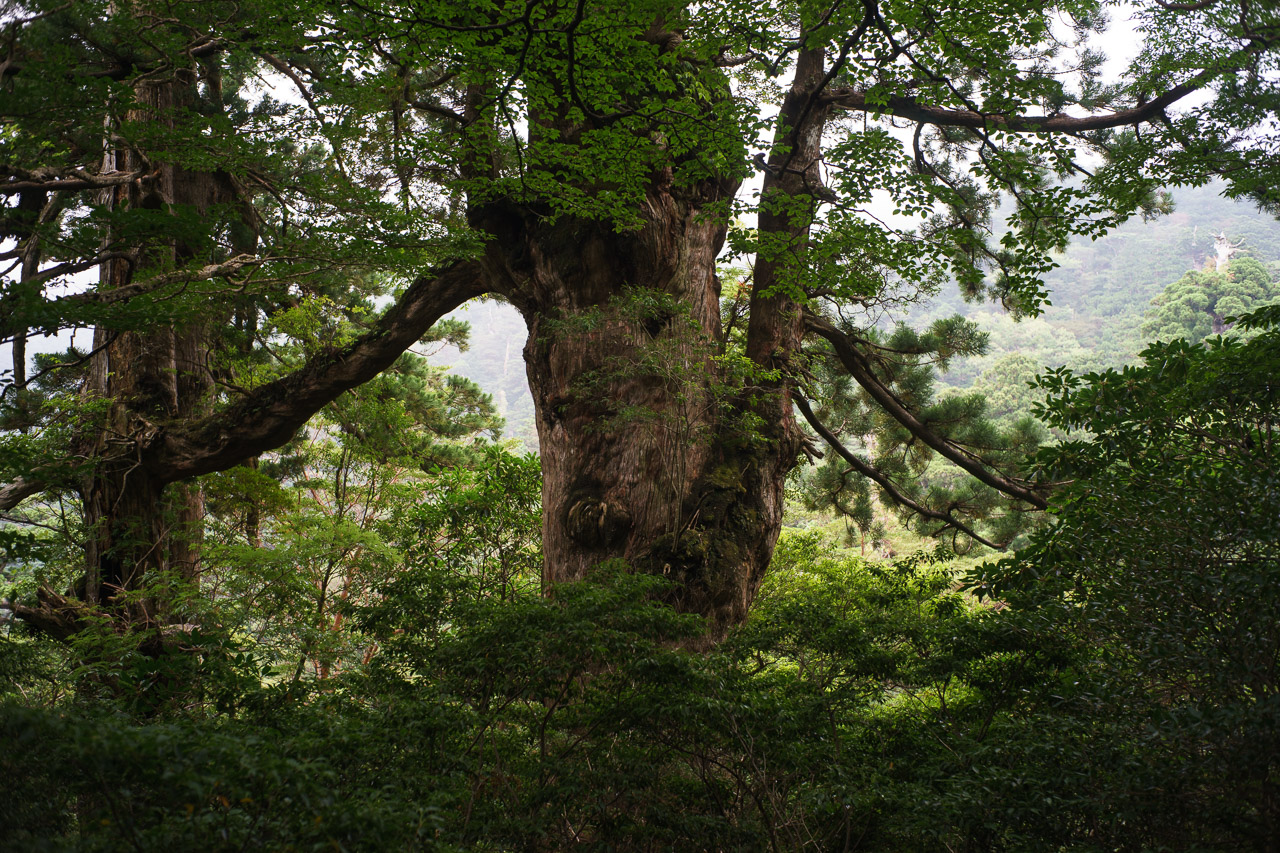 After a few more turns, approx. 2h from the Wilson Stump the huge Jomon Sugi (縄文杉) comes into view. It’s 25.3m high and over a thousand years old. Apparently, more than 10 different types of other plants are growing on the tree itself! 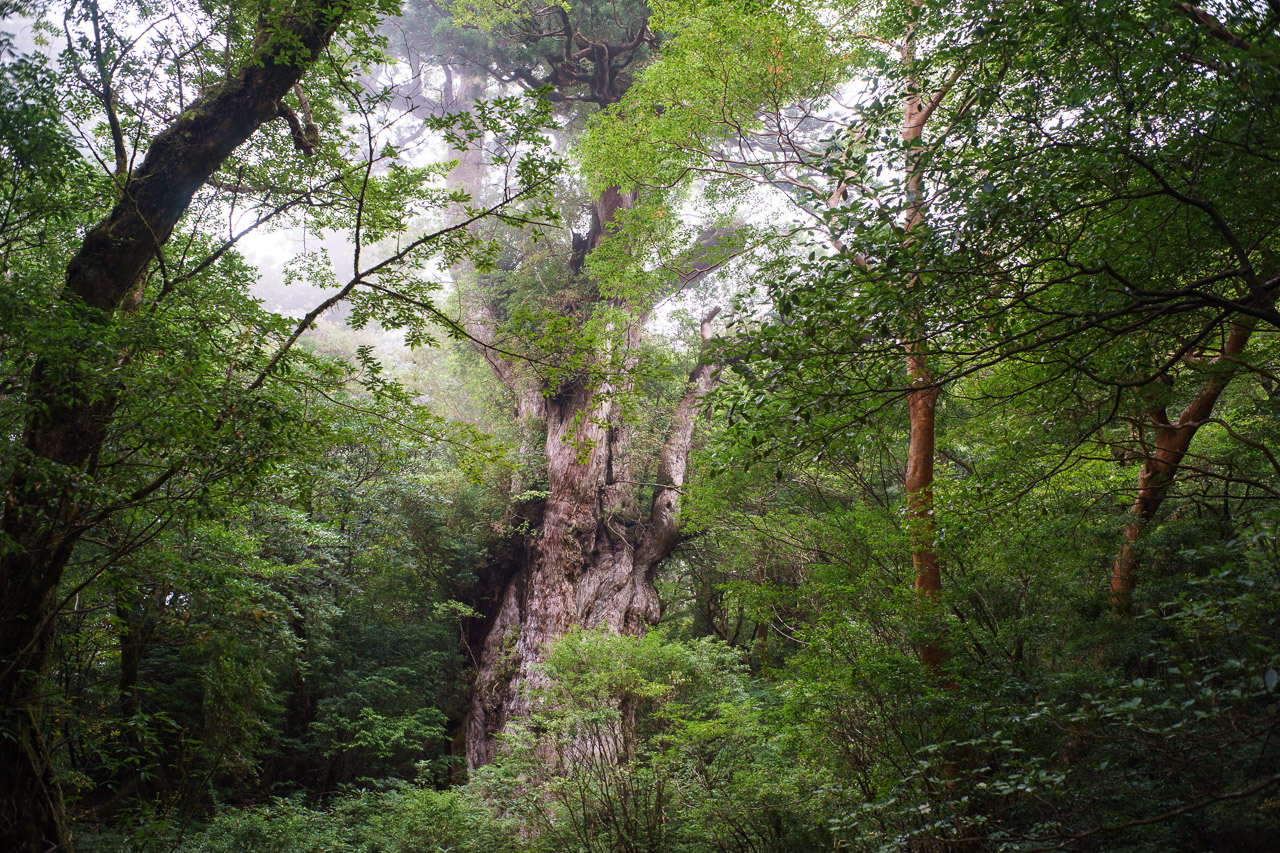 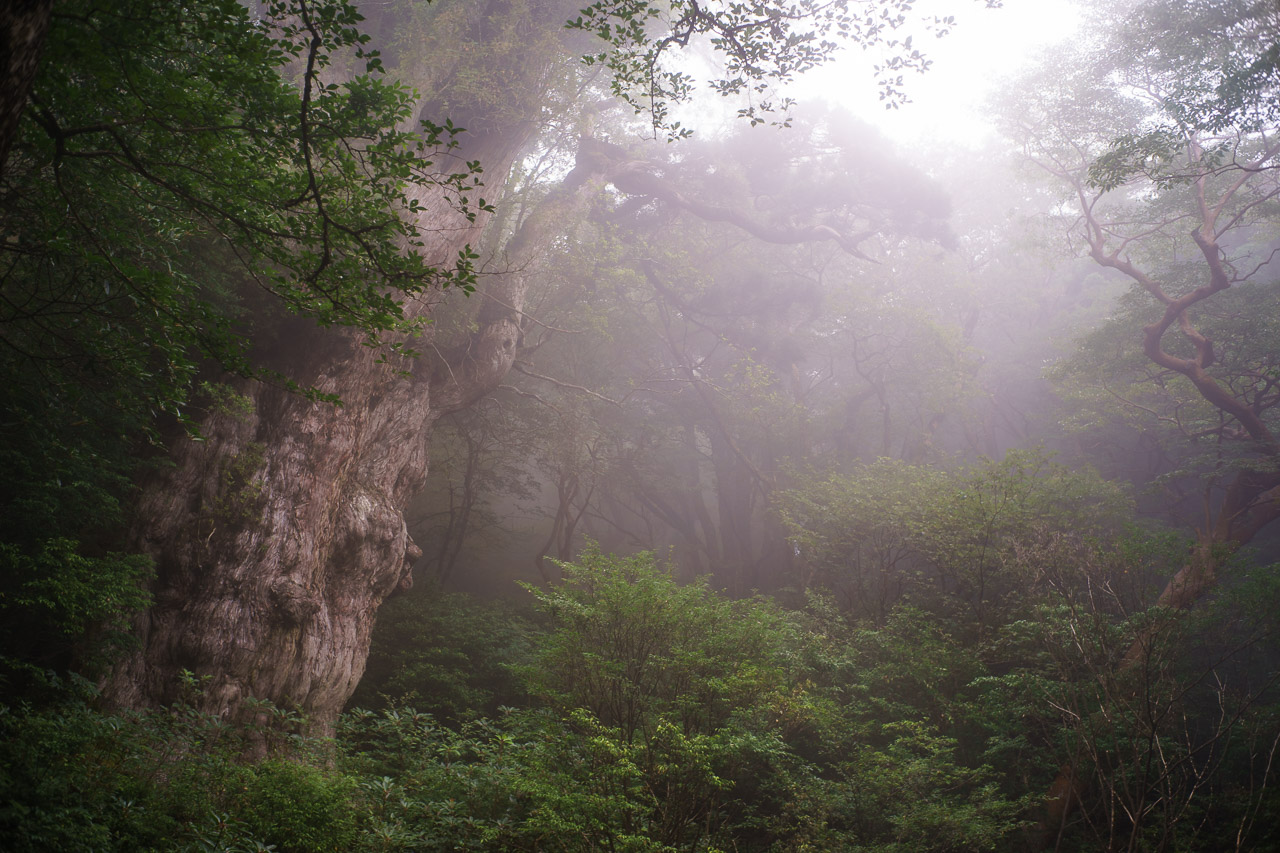 To view the tree, two observation decks have been created recently which enable a better view and kind of protect the environment. This is a very good place to take a rest, albeit you surely won’t be the only person resting there. Most day trips from the Arakawa Trail head turn around at the Jomon Sugi so if you prefer next to no people it’s better to take a rest a little further on. 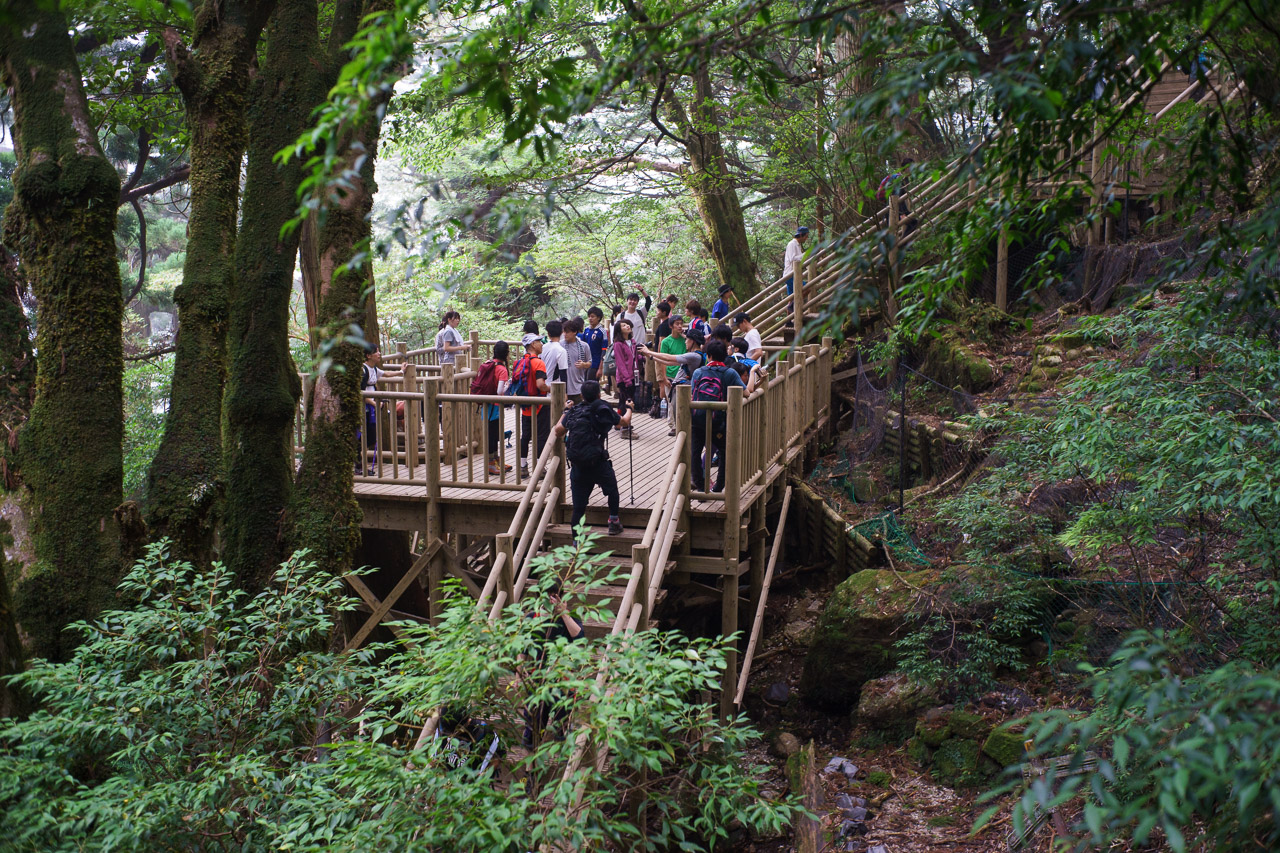 From this point on the trail becomes a little bit harder to spot. There was a little sign in Japanese indicating the direction towards the Takatsuka Hut (高塚小屋) but we missed it the first time around and therefore did two laps around Jomon Sugi. 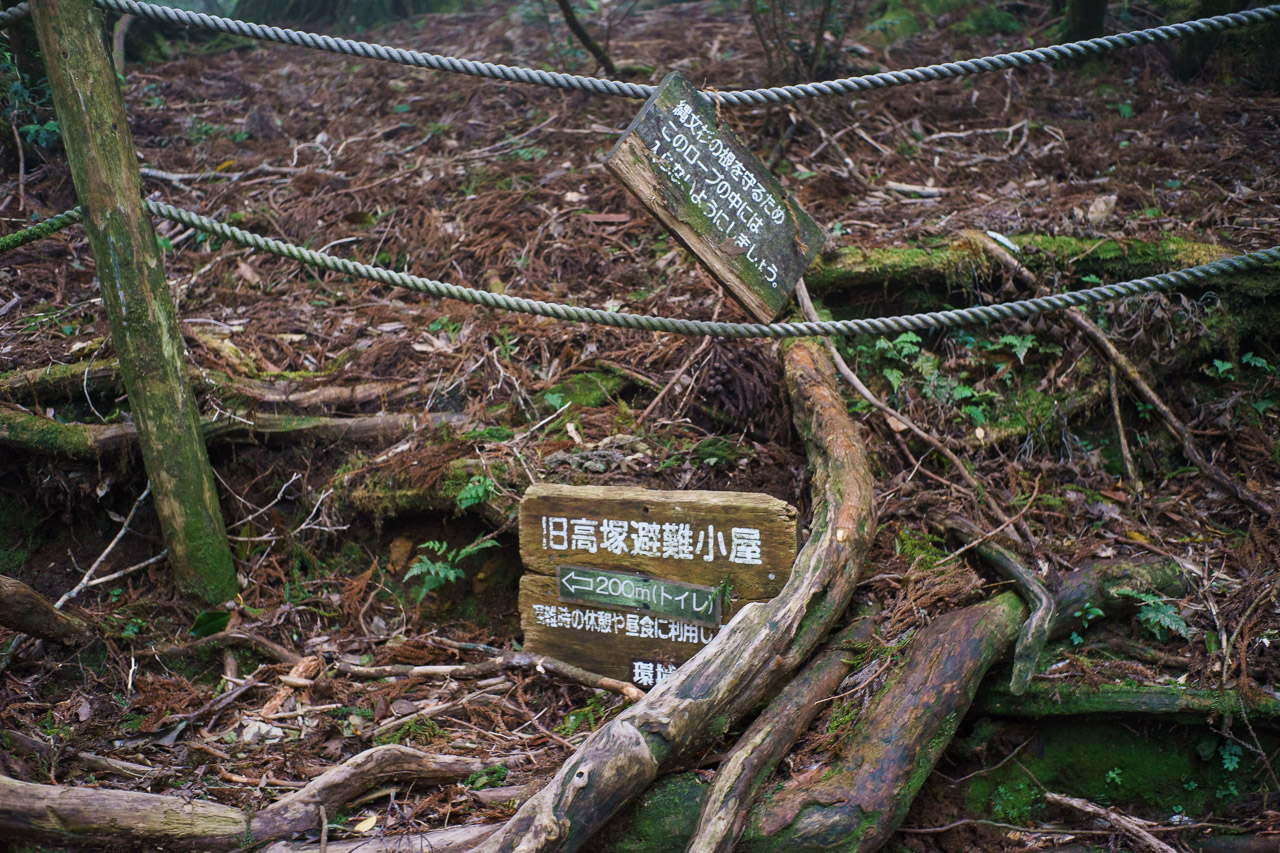 After approx. 10mins we reached the Takatsuka Hut, which consists of an old, run down hut and a newly built emergency hut. Note that the emergency hut is not intendet for people staying there regularly and thus only to be used in an emergency. I’d recommend not to stay at the Takatsuka hut but to hike further (1.7km) towards the Shin-Takatsuka Hut (新高塚小屋). 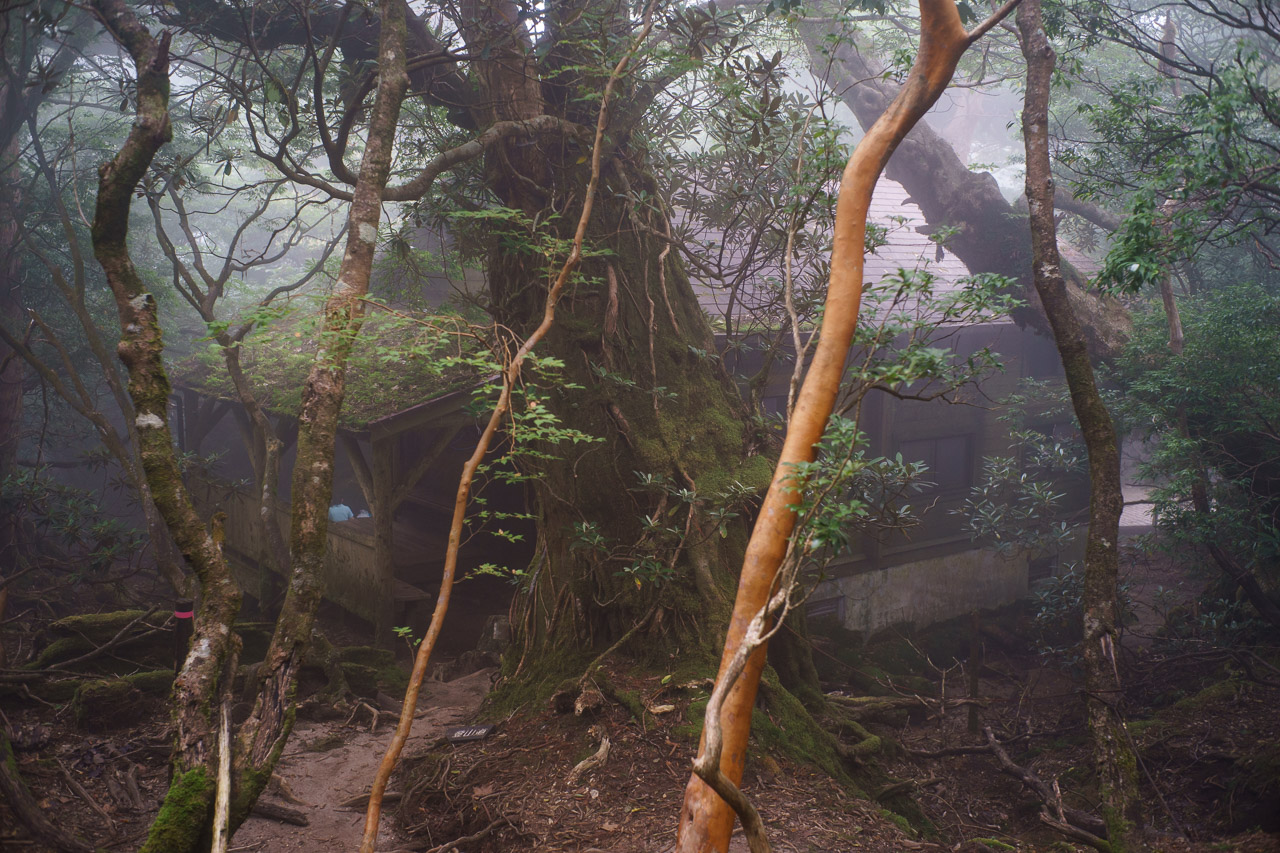 After about 1h the Shin-Takatsuka hut (1475m altitude) peeked through the thick fog and forest. It was a very foggy day.. The hut is fairly new and has wooden planks surrounding it where you can pitch your tent (if it is freestanding, otherwise you might need to freestyle with ropes…).

While the trail continues to be surrounded by big trees, it definitely gets lighter from here on and the feeling of daylight comes up more and more. At 1620m we got out of the forest for the first time and were greeted by deers! 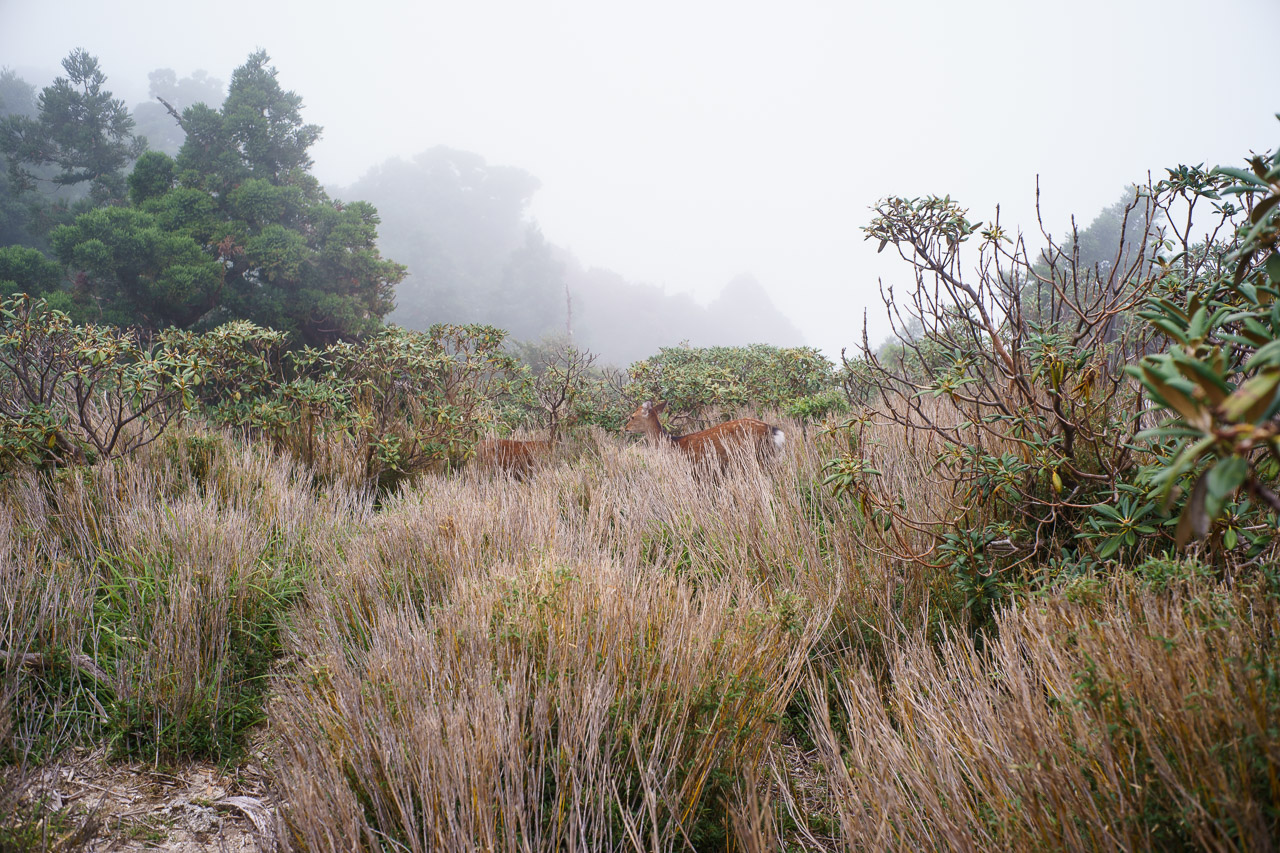 From then on, the path alternated between open skies and forest, making for a very nice atmosphere to walk through :)!

After one more hour we finally escaped most of the forrest and the peaks came into view. Although only for brief periods as the clouds were moving at an incredible speed! 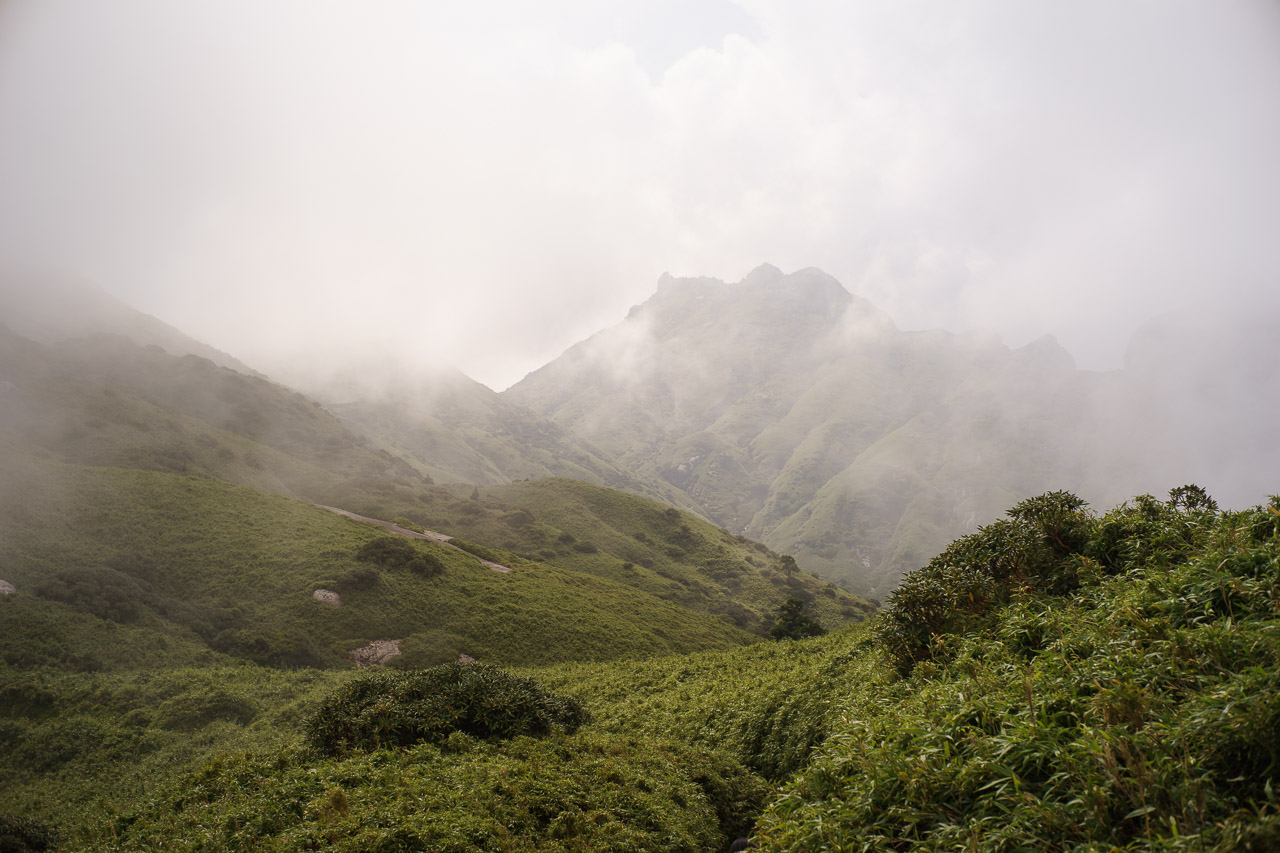 Close-by was also a place which could make for a good emergency camp ground. Those places are rare on the trial that’s why I’m mentioning them, this one is located at 30°20’36″N 130°30’20″E and approx. 2h from Shin-Takatsuka hut. From there it’ll take about 1h till the summit of Mt. Miyanoura. 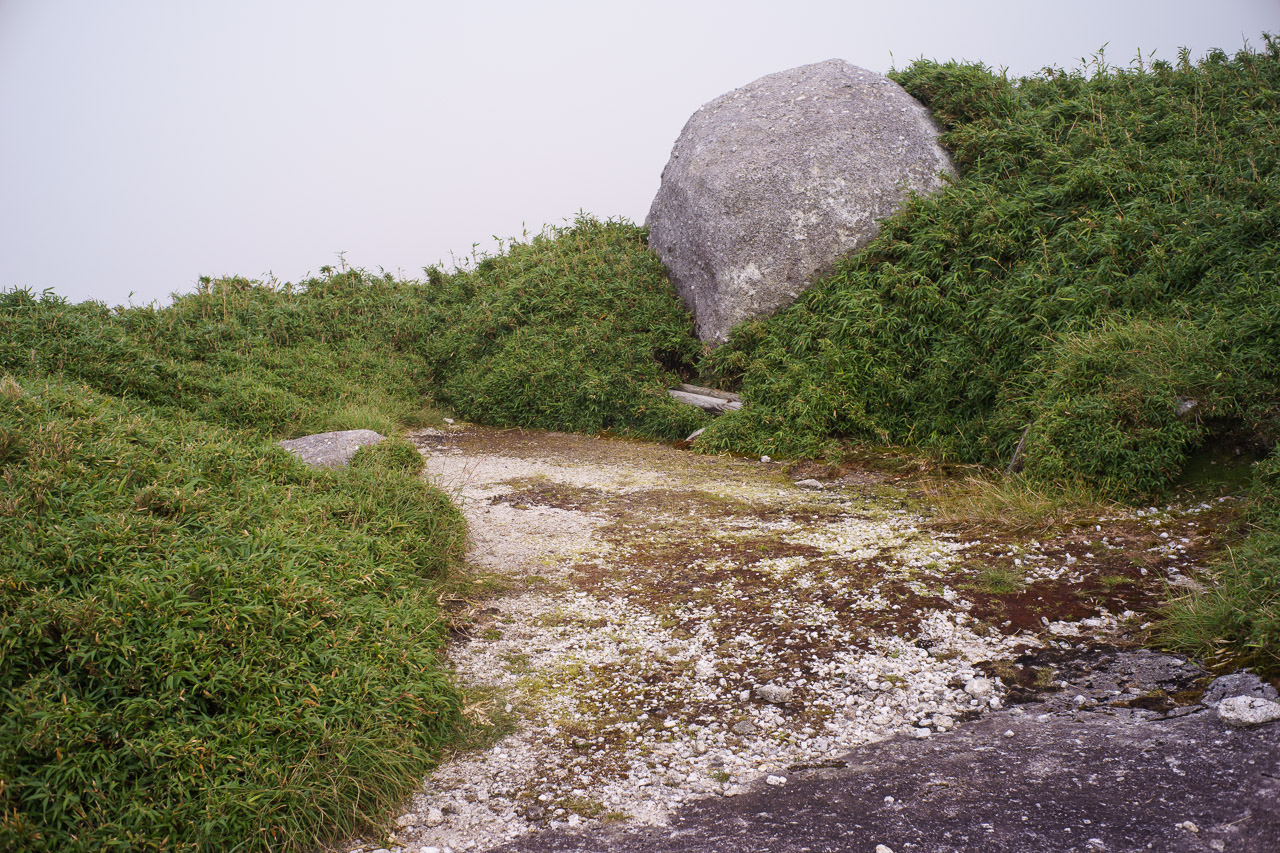 From here on I somewhat regretted to hike in shorts because the bamboo (maybe it’s a different plant, it seemed like some sort of small “baby bamboo”) gets really thick and will scratch your legs a little. Also if you’re scared of bugs, here is the place to wear a mask as to not eat any! It’s not that bad however… 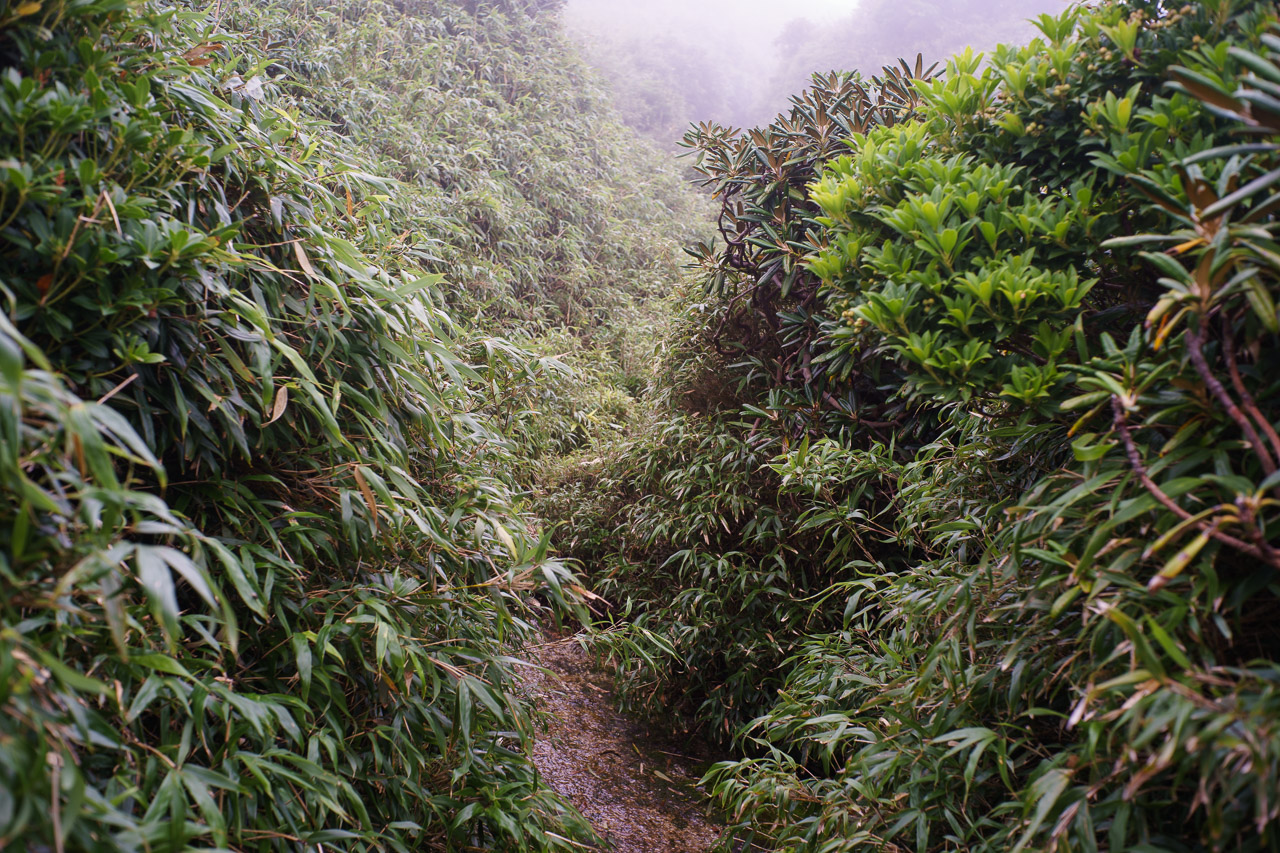 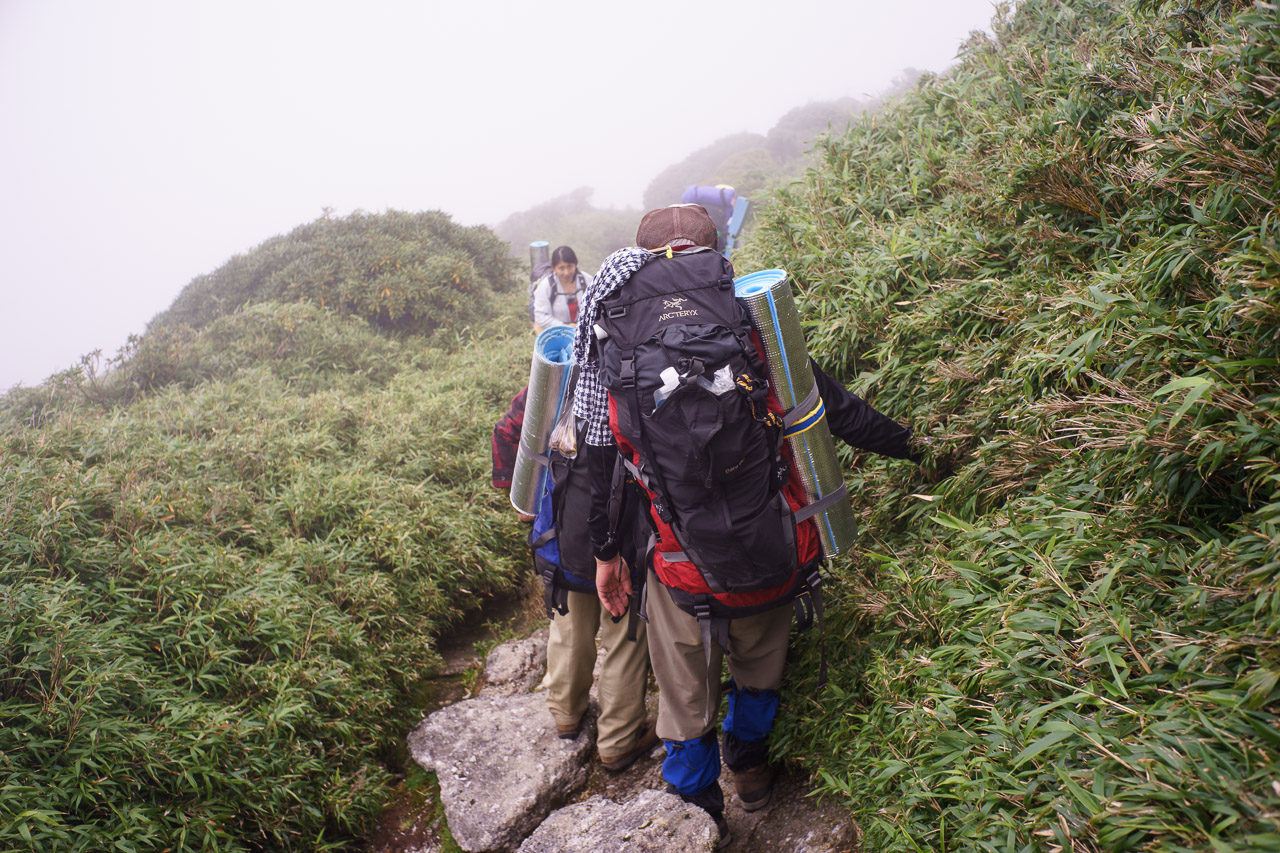 Finally we made it to the top! And as we were kind of late, we were the only people which was an incredible feeling. From the Shin-Takatsuka hut it took ~3h of moderately paced walking with breaks.
Before we arrived it also cleared up a little so that we were even able to get a quick glimpse of the ocean surrounding the island, too short however to take a picture of it! Nevertheless, the picture below shows the trail through the bamboo grove from where we came… 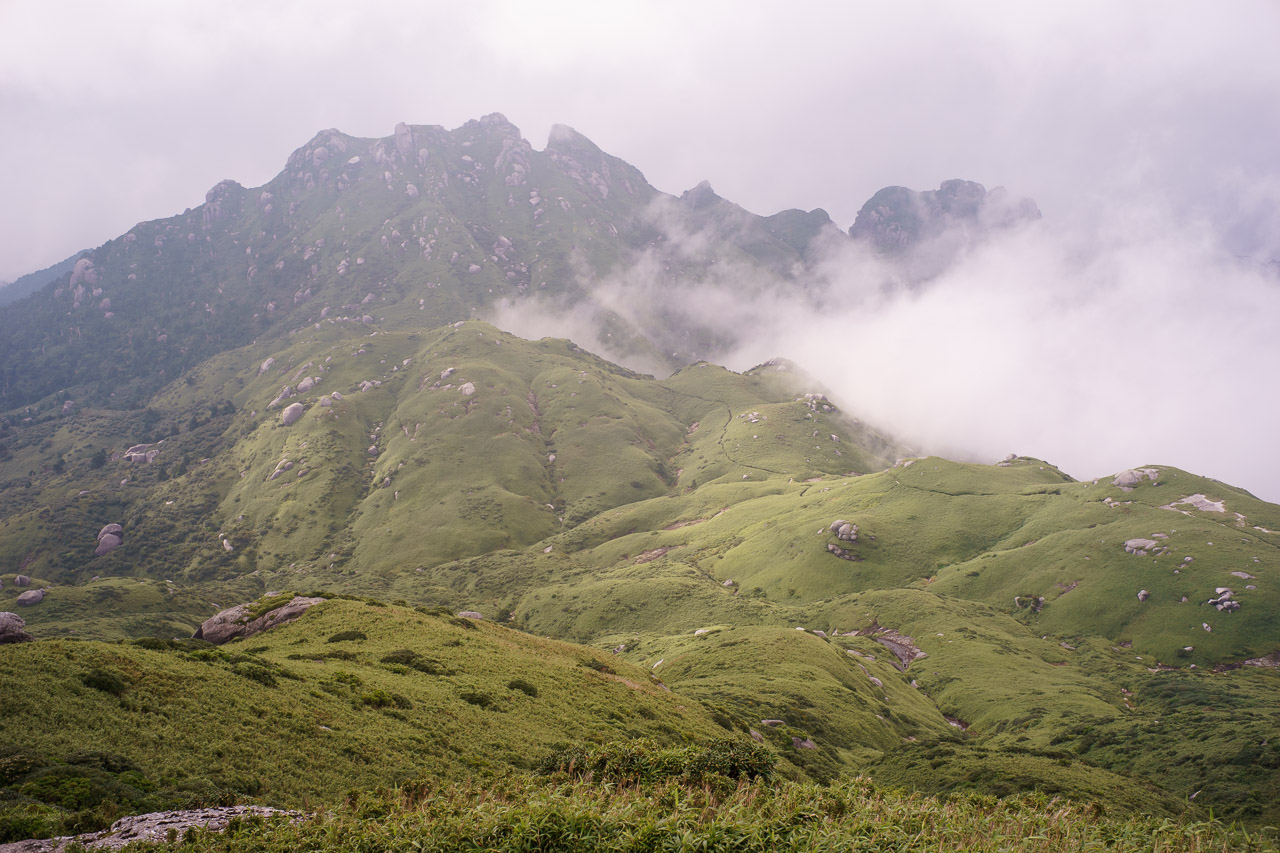 After an extended break with food we continued, knowing that it was fairly late in the day and we definitely wouldn’t be able to make it to the Yodogawa Hut before dark. Descending the mountain this absurd stone constellation came into view… If there would’ve been a little more fog then it might actually look scary! 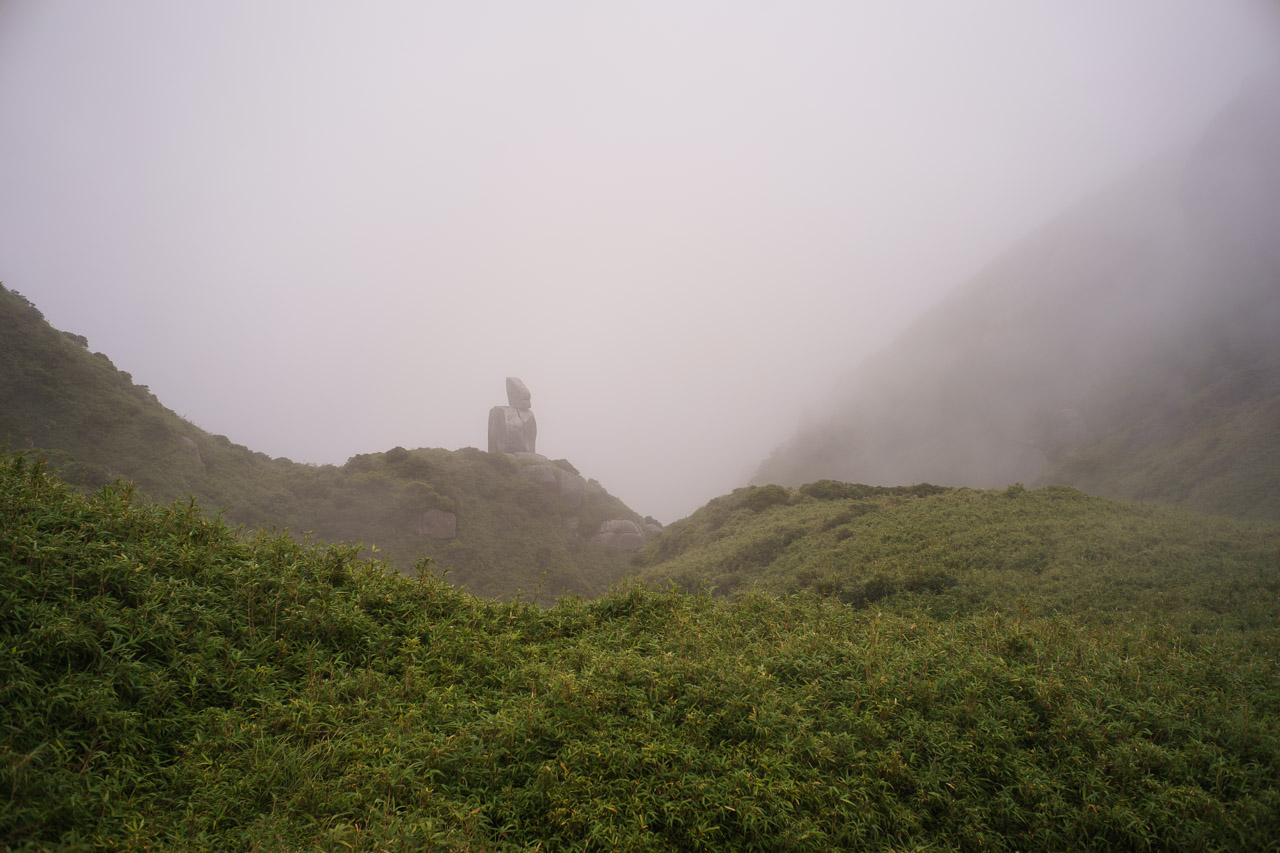 From the summit on the trail is going up and down a lot but the average altitude is relatively constant. As we did not have a clear image of how the second part of the trial would look we started to worry a little bit as the dark set in. However, beautiful light ensured…. 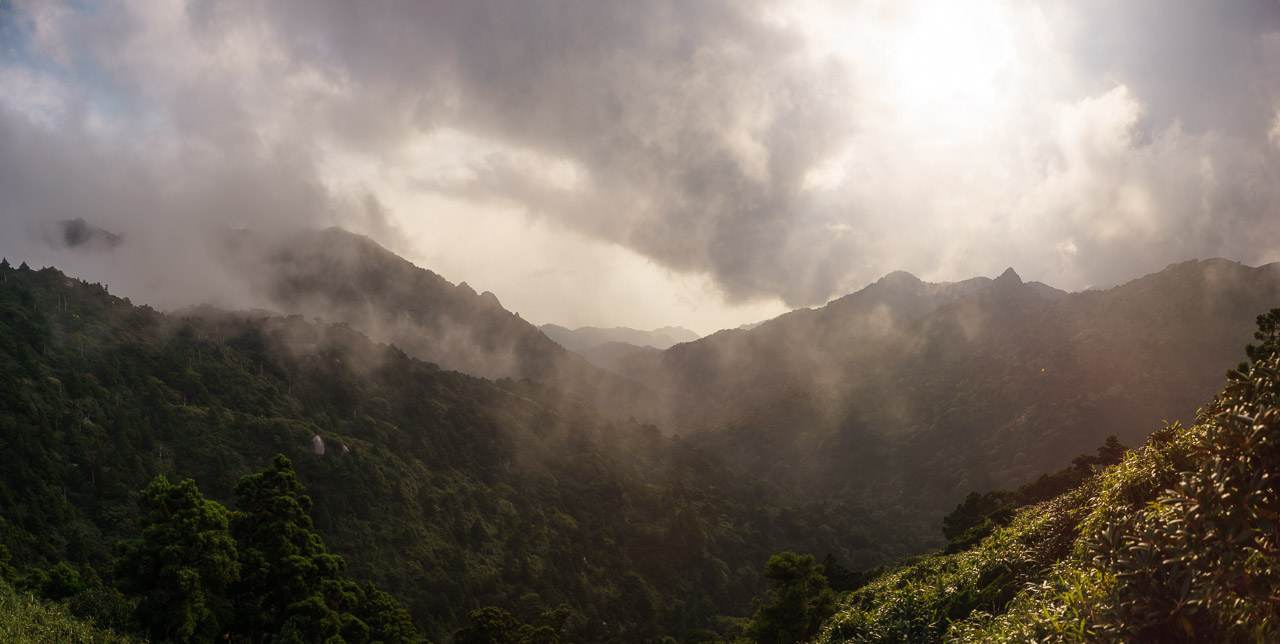 Two hours after leaving the summit we reached Hananoego (花之江河) and it was now nearly dark. Hananoego is a swamp land at around 1650m and usually filled with people during the day. However, with the fog and darkness it seemed really spooky to us. We didn’t waste much time and got our head torches out and hit the trail again towards Yodogawa. Even though we seemingly hiked a rather long way from the summit already, the altitude was comparatively high so we knew that a steep downhill path was coming up… 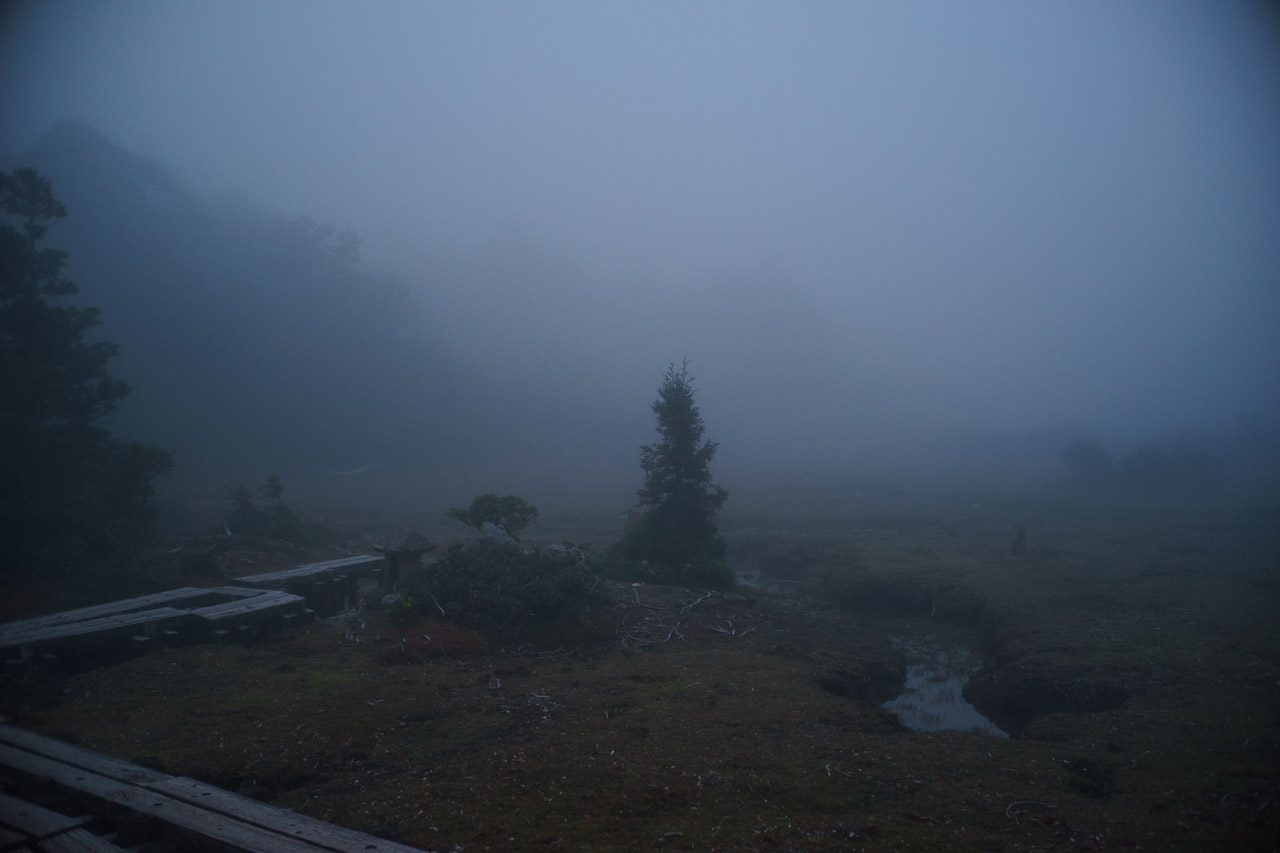 It was now really really dark in the forest and the fog made it more difficult to see despite the head torches.. 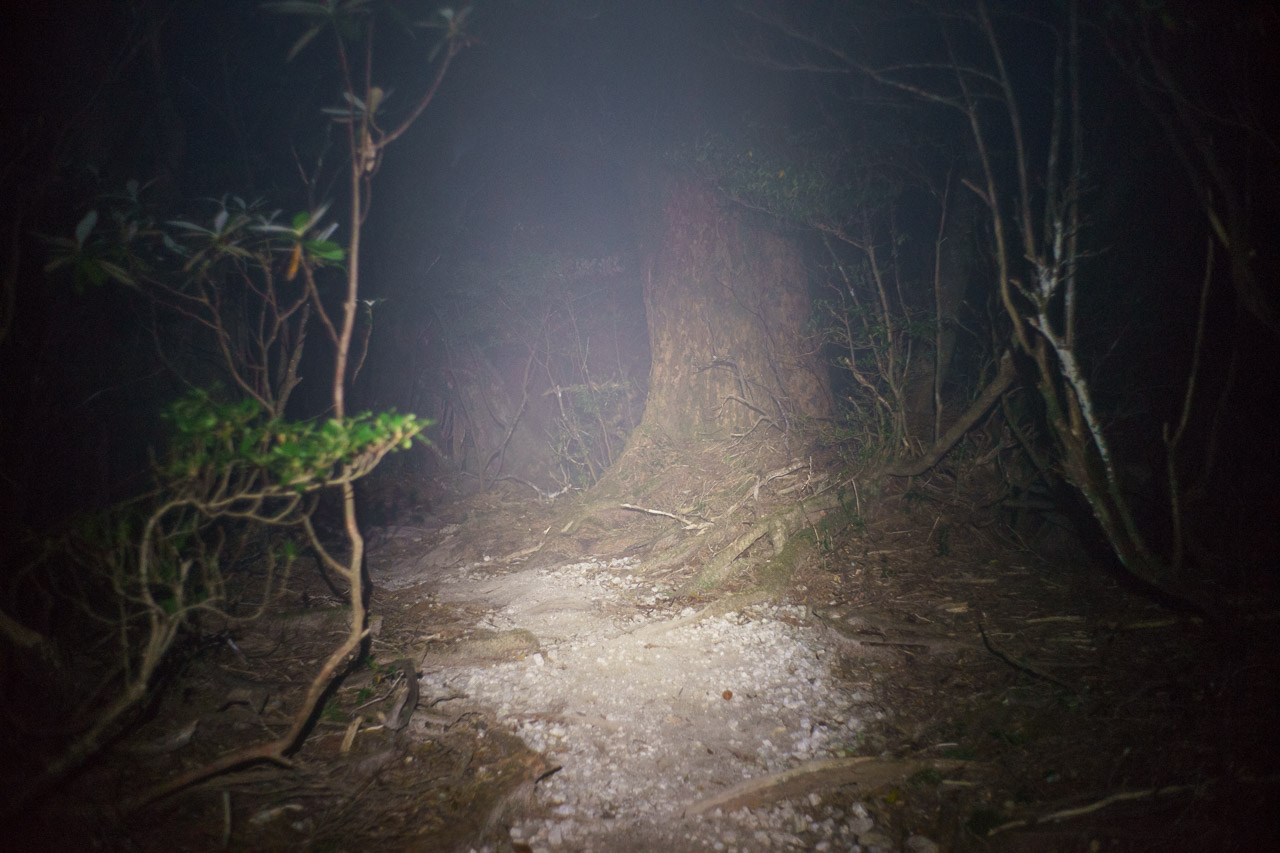 Finally, 1.5h after leaving Hananoego we arrived at the Yodogawa Hut! And to our surprise we were not the only ones arriving late, as we met a couple from Australia having dinner. So we made some well earned pasta too… 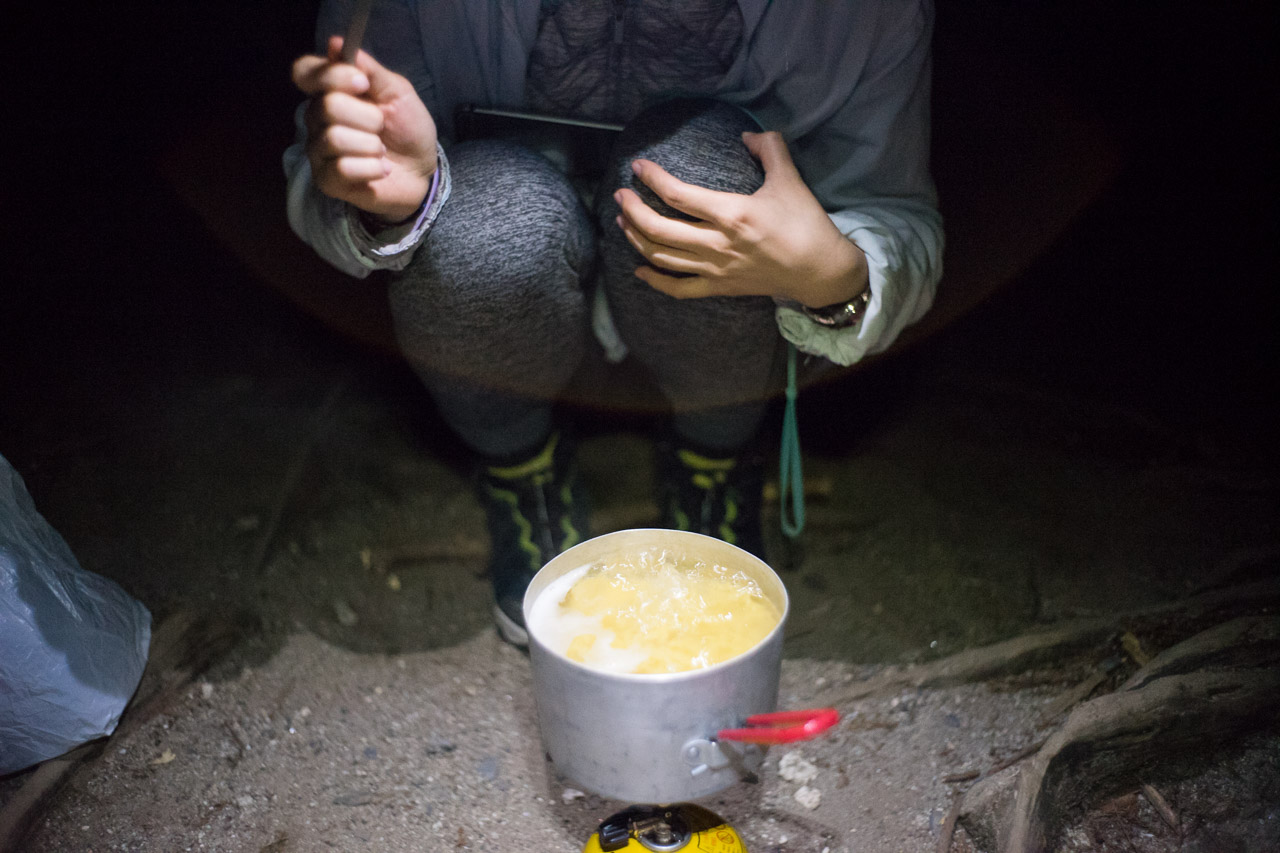 The Yodogawa hut had a designated camping area in front of the hut, which was very nice. The river providing water is also close by. During the night it unfortunately began to rain so we had to pack up out stuff while it was still wet. 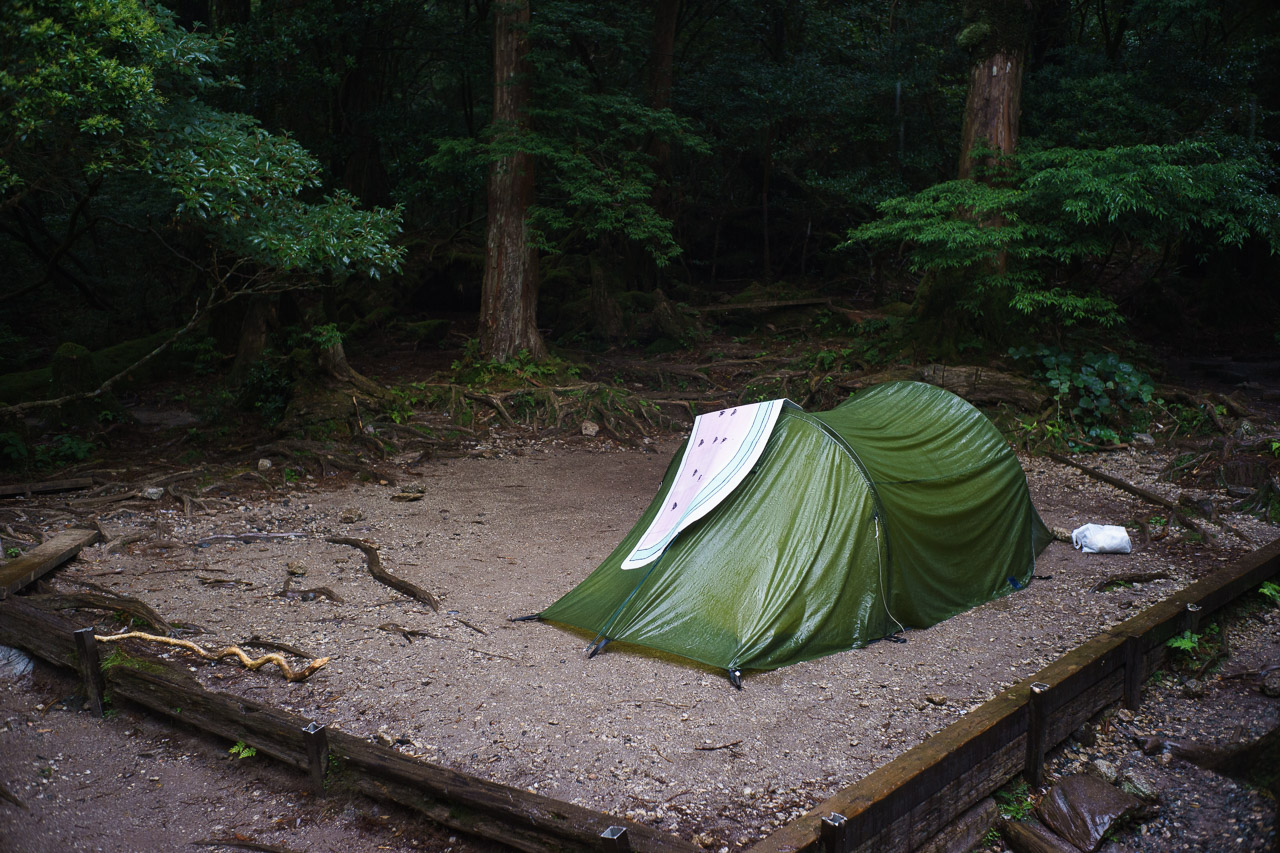 All in all I have to conclude that Yakushima is a great place for hiking, especially as the ancient forest envrionment is something different to the alpine environments. I would definitely like to come back to this underrated island!